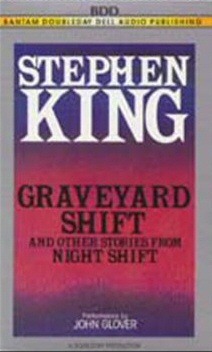 Today’s blog will be the only one for this week, I’m afraid. From tomorrow until Sunday, my husband and I will be in California for our overdue honeymoon! We’re both very excited and looking forward to getting some relaxation and fun. For now, I’ve decided to look at an aspect of Stephen King that doesn’t immediately come to my mind: short stories. He’s written tons of them and in the interest of time, I’ve chosen to look at the story “Graveyard Shift” from the “Night Shift” collection. Let’s start things off with the plot.

Hall is a drifter currently working in a textile mill in Maine when his boss, Warwick, comes to him with an offer. For a small raise, Hall is tasked to work the graveyard shift with a few others cleaning up the mill’s basement. The mill has a rat infestation problem which only seems to get worse and more dangerous as they venture into the basement. But when Hall discovers a hidden level below the basement, he in turn makes Warwick help him investigate. What sort of things might they find lurking down there?

Once again, King fills this story will plenty of vivid details to the point of some of them being disturbing. Luckily, because of the short story format, he also keeps the pace relatively quick. However, this does mean that the characters are pretty bare bones as a result. All I learned about Hall was that he moves from place to place, hates Warwick, and loves throwing cans at the rats. His co-worker, Wisconsky, barely gets any characterization outside of being nervous around rats, and Warwick is a bit cruel and dickish to all his employees. He especially prefers to pick on Hall for formally being in college. These minor details made it hard for me to care what (if anything) happened to them.

While I liked that the story was short and to the point, the ending was a bit lackluster. The imagery was well done, but the whole thing kind of ends on a anti-climatic note. I suppose it’s an appropriate ending for this type of story, but I wasn’t a fan of it. I also feel like the scare factor only came in for me around the end, because rats as a general concept don’t bother me that much.

Overall, “Graveyard Shift” is a decent but kinda forgettable short story. The detailed descriptions help sell the situation, but the characters are a bit one-note and the ending wasn’t all that satisfying. So, your mileage may vary on this one. Thankfully, as I mentioned earlier, King has written many short stories so I would encourage people to at least look into his collection books.